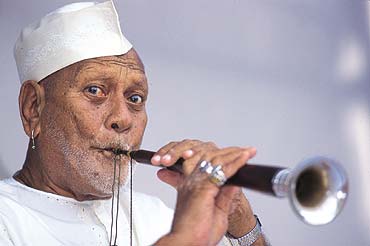 Ustad Bismillah Khan was an Indian Shehnai maestro. He was awarded the Bharat Ratna (in 2001), the highest civilian honour in India and he also gained worldwide acclaim for playing the Shehnai for more than eight decades.

Some lesser known facts about him is that he was raised and blessed in a friendly Hindu environment which recognized talent, irrespective of one’s religious denomination. His ancestors were court musicians and used to play in the princely state of Bhojpur, now in Bihar. His father was a Shehnai player in the court of Maharaja Keshav Prasad Singh of Dumraon Estate, Bihar. At the age of six, he moved to his maternal house, close to Varanasi, on the bank of Ganges. His reverential and humble disposition attracted the blessings of mother Ganges, and on her banks, he learnt the art of playing this instrument. He mastered the art of playing Shehnai under the tutelage of his uncle, Ali Baksh ‘Vilayatu’, a Shehnai player attached to Varanasi’s Vishwanath temple. Neither was Bismillah’s family members shy of seeking blessings of Lord Shiva, nor is Lord Shiva of Varanasi reluctant to offer his blessings to a non-Hindu.

He was of course a pious Shia Muslim. However, like many Indian musicians, regardless of religion, he was also a devotee of goddess Saraswati, the Hindu goddess of wisdom, and arts. He often played Shehnai in Hindu temples, for the pleasure of God and His devotees. He especially performed at the Vishwanath temple of Lord Shiva at Varanasi.

Ustad Bismillah Khan is one of the finest musicians in post-independent Indian Classical music and one of the best examples of Hindu-Muslim unity in India. He played Shehnai to audience across the world. On his death, as an honour, his Shehnai was also buried along with him. He was known for his vision of spreading peace and love through music. He said, “Even if the world ends, the music will still survive”. He also appealed, “Music has no caste.” Being a recipient of love and admiration from the majority Hindu community of India, he was grateful and prayerful in his dealings with all. He had deep respect for Hindu religious sentiments. As a reward for his open minded approach to religion, Lord Krishna personally blessed him in one special encounters.

In spite of being a Muslim, the legendary Ustad had great respect for Sri Krishna; and that could have prompted the merciful Lord to appear in person. Once, Ustad Bismillah Khan was traveling by train from Jamdshedpur to Varanasi. It was a coal run passenger train and Ustad was traveling in the third class compartment. From an intermediate rural railway station, a young cowherd boy boarded the bogey in which Ustad was sitting. He was a dark and lean boy; and he was holding a flute in his hands. Slowly the boy started playing his flute. The supreme quality of his music surprised the maestro Ustad who didn’t even know the ‘Raga’ the boy was playing. Ustad Bismillah Khan immediately recognized that the boy is none other than Sri Krishna, the Supreme God Himself. The nectarine Nada-Brahman ( Brahman in the form of music) flowing out of Krishna’s flute filled Ustad’s heart with ecstasy ; and tears of joy started pouring out of his eyes .

After the stunning performance, Ustad called the boy near and presented him with a coin requesting him to play the song again. Krishna obliged. This repeated again and again until Bismiillah Khan’s wallet became empty. Young Krishna got down at the next railway station and disappeared. Ustad Bismillah Khan was at that time en route to participate in a music concert related to Kumbha mela (a Hindu religious gathering of millions of devotees). In that concert, Ustad presented the new ‘Raga’ (which he learned that day from Krishna) . This melodious ‘raga’ was greatly appreciated by the audience who begged Ustad to sing it many times. The music scholars around couldn’t make out the name of the ‘Raga’ and they asked about it to Bismillah Khan. Ustad replied that the name of the Raga is ‘Kanhaira’. (Kanahi is another name of Krishna. Lord Krishna is lovingly addressed by His devotees as ‘Kanahi’)

Next day’s news papers contained headlines about the melodious new ‘Raga’ invented by Ustad Bismillah Khan. Having read it, Hariprasad Chaurasia, the legendary Musician (Flutist) , asked about ‘Kanharira Raga’s’ details to Bismillah Khan . Ustad revealed the truth and sang Kanharira; and Hariprasad Chaurasia , the topmost Flutist in the word , burst into tears of joy. ‘Kanharira’ is a divine gem in Indian music, as it originated from the lotus lips of Sri.Krishna , the God of Gods !!!.

Whose Role Model was Hitler?